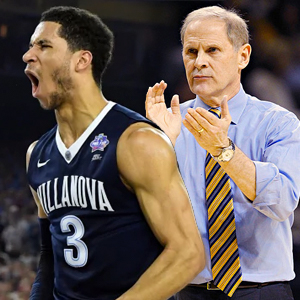 MOBILE, AL – The stage is set for another NCAA champion to be crowned Monday night, and Michigan and Villanova are ready to battle it out for the title.

The two teams are set to face off Monday at 8:20 p.m. and the game will be available to watch on TBS. Michigan took down Loyola-Chicago 69-57 in the Final Four Saturday.

Villanova went up against Kansas in the Final Four and won 95-79.

“If you look at it from Saturday night, Michigan did not play that well,” said Joe Niland, University of Mobile head coach and cousin of Michigan head coach John Beilein. “They closed the game well, but I don’t know who could have beat Villanova Saturday. It was ridiculous how many shots they made.”

On Saturday, Michigan forward Moritz Wagner played big for the Wolverines. Wagner tallied 24 points on 10-14 shooting and pulled in 15 rebounds.

Villanova had six players in double figures Saturday, including 24 points from forward Eric Paschall on 10-11 from the field.

“Wagner is very good,” Niland said. “He’s going to have a size advantage, and that even helps on the perimeter.”

In the second round, Michigan played a close 64-63 game against No. 6 seed Houston, but they’ve made it all the way to the championship game. Villanova is winning games by an average margin of 17.8 points, and the lowest margin of victory for the Wildcats is 12 points.

Villanova is the favorite to win the championship game by 6.5 points. The Wildcats won the NCAA championship in 2016, while the Wolverines haven’t won an NCAA title since 1989.

“Villanova is really good defensively,” Niland said. “I would not be surprised if we do see Michigan, even though they play primary man-to-man defense, mix it up a little bit. We might see the 1-3-1 come out.”

Michigan and Villanova haven’t played against each other in the NCAA Tournament since 1985 when Villanova became the national champion. The teams played in the second round, and the Wildcats came out on top 59-55.

For more information, tune in to the Opening Kickoff on WNSP weekday mornings from 6 a.m. to 9 a.m. and listen to the full interview with Joe Niland below.