LISTEN: Wimp Sanderson and Kerry Goode on the Opening Kickoff 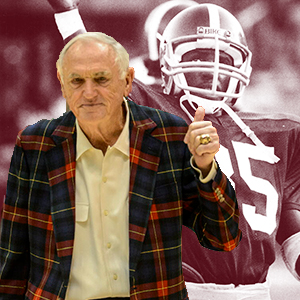 Sanderson served the University of Alabama for 32 years—12 as the head basketball coach. He gave some insight on this season’s Crimson Tide basketball team.

“Basketball, for most people, is up and down,” said Sanderson. “Basketball is a highly skilled game where people don’t expect you to ever lose a game.

“This is a basketball team that has a bunch of young guys on their team that plays to the crowd, and when the crowd is there, they play better. The crowd encourages them, and they play better because of that. They played the best half against Florida I’ve seen an Alabama team play in a long time.”

The highlight of Sanderson’s coaching tenure at Alabama was the 1986-87 season, when his team went 28-5 and won the SEC Conference Tournament. The team made it to the Sweet 16 in the NCAA Tournament as well.

“We won eight out of nine on the road and won the tournament again that year,” Sanderson said. “Even a team with Sprewell didn’t do that. You have to win on the road to be greatly successful, but the ultimate goal is to get into the NCAA tournament regardless of what you do.”

Sanderson closed by speaking on what Alabama can do to finish this season strong.

“If Alabama rebounds defensively and runs with it and gets it to the other end as fast as they can go, then they are a better basketball team,” said Sanderson. “They’ll beat Tennessee, but they’ll have a hard time with Tennessee.

“If they get the basketball out and get going with it, then they are a much better basketball team. When they come in and have to rely on half-court offense, sometimes it doesn’t work as well. Your defense leads to offense, and that’s what you have to do.” 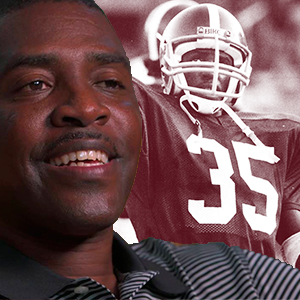 Kerry Goode was the SEC Freshman of the Year in 1983 as a running back at Alabama and was diagnosed with Amyotrophic lateral sclerosis (ALS) in 2015.

“Like any other terrible illness, you go through the why me and all that, but you can’t stay there,” Goode said. “You’ve got to keep moving and start living.

“My mindset is no different today. It’s what I’ve been diagnosed with, but you can’t treat it as a life sentence and walk around being depressed every day. You’ve got a lot of life to live, and you’ve got to go out and live it.”

In September 2015, he started the Goode Foundation with the vision of “Normal lives and lifespans for those diagnosed with ALS.”

“My wife and I would go to every clinic in Atlanta,” said Goode. “You would sit in the waiting room waiting for your appointment, and you would meet a lot of different people with ALS. You start sharing stories of your journey with the disease, and you find out that a lot of people are being taxed by having a disease, not being able to make it to the clinic, traveling from Alabama to Georgia and all over the place, and coming to spend money overnight. My wife and I decided to start trying to help these issues and also help to find a cure, and that’s what we’re doing.”

Goode was a seventh round pick in the 1988 NFL Draft, but he ended up coaching in the NFL from 1993 to 1999. He talked about being able to go to the NCAA Championship game this year to see Alabama come away with the crown.

“It was a great game,” Goode said. “I think Georgia could have won it, but they went conservative and you can’t go conservative against Alabama.”

Hear the full interviews below. For more like this, listen to the Opening Kickoff weekday mornings from 6 a.m. to 9 a.m.