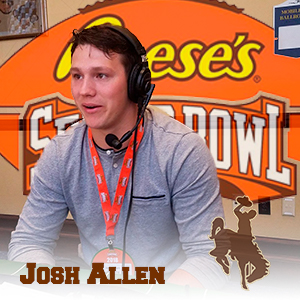 MOBILE, AL – Three 2018 Reese’s Senior Bowl invitees joined WNSP on the Opening Kickoff Monday to discuss the upcoming game as well as their futures in football.

Wyoming quarterback Josh Allen started off discussing his decision to stay in college last season rather than declaring for the NFL Draft.

“Last year I was in a position where I just didn’t feel ready,” Allen said. “Looking back at it, it was the best decision for me to come back. I went through a lot of ups and downs this year, and it was definitely a great opportunity for me to go back.
This year, I felt ready, and now it’s go time to fulfill my dream.”

Allen finished last season with 1812 total yards and a 56.3 percent completion rate in 11 games. Despite his success at the collegiate level, Allen did not attract much attention out of high school.

“I had zero offers out of high school,” said Allen. “I decided I didn’t want to give up my dream of trying to play football, so I went to junior college, I started six or seven games, and Wyoming was the one to offer, so I took the chance.”

Allen is a graduating junior, which is why he will be able to play in the Senior Bowl before entering the NFL.

“I had to graduate and fulfill my degree before I could accept an invitation,” Allen said. “I had been talking with people associated with the senior bowl for a long time and understood that if I did get my degree, it was something that I really wanted to do. I want to come out and show that I deserve to be out there and compete with these guys.”

The quarterback who led this year’s explosive Oklahoma State offense, Mason Rudolph, joined the show. He talked about his foot injury, which will keep him from playing in the Senior Bowl.

“I’ve got a foot sprain,” Rudolph said. “I sprained it during the fourth quarter of the bowl game on (December) 28. I talked with Dr. Anderson, the foot specialist in the NFL, and he recommended that I not play in this game even though I was excited about my invitation.

“It’s not the end of the world. I’m going to come down here and interview well, weigh in tomorrow, and do everything I can to personalize with some coaches. I want to make the best of it and keep moving forward.”

Rudolph averaged 10 passing yards per attempt for the Cowboys in his senior year. Oklahoma State defeated Virginia Tech in the Camping World Bowl, where Rudolph threw for 351 yards and two touchdowns despite his fourth quarter injury.

“For me as a quarterback, if I was to sit out, for my team, it would be a big momentum killer,” said Rudolph. “I was fired up to play my last game. I knew I wanted to go out with a victory and spend that quality time with my teammates.”

Alabama defensive back Levi Wallace spoke about his experience as a walk-on at a large university.

“Coming out of high school, my dad had gotten sick, but we weren’t sure what was going on,” said Wallace. “I had little schools
looking at me, but I told them I wasn’t really interested in playing football because I wanted to find out what was going on with him. 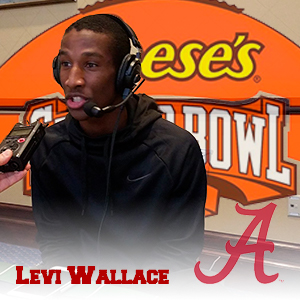 “The day before I came to Alabama, I found out he had ALS. He told me I should walk on to the team. He said you owe it to yourself to just go out there and compete, so I walked on in the spring. It’s been a blessing to play at Alabama, and it’s been an unbelievable experience.”

Wallace continued to talk about his experience as a member of the 2018 National Championship team and the final play of the championship game.

“We stopped them to a field goal, so we were excited about that,” Wallace said. “Then Tua did a great job recognizing what Georgia was in.

“We were all looking at the board, and we saw which receiver he threw it to, and everyone just got up. I threw my helmet, we were all running on the field, and it was pretty exciting.”

Closing out the show, Wallace discussed his future prospects in the NFL and his hopes for the Senior Bowl on Saturday.

“I’m looking forward to the challenge,” Wallace said. “I’m excited to be here at the Senior Bowl. I’m excited just to compete against those guys.”

You can listen to the full interviews below. For more, tune in to The Opening Kickoff with Mark and Lee weekdays from 6 to 9 a.m.