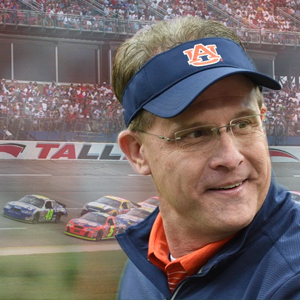 MOBILE, AL – Auburn football coach Gus Malzahn will be the Grand Marshal of the Talladega Superspeedway’s GEICO 500 race on April 29.

After being the Honorary Pace Car Driver of the event in 2014, Malzahn will give the signal for racers to start their engines at this year’s GEICO 500 Monster Energy NASCAR Cup Series race. Malzahn joined driver Erik Jones on Auburn’s campus Thursday to promote the event.

“I’m really looking forward to being the Grand Marshal at Talladega,” said Malzahn. “It was a great experience, gave me a great appreciation of the drivers and how fast they go. The crowd was unbelievable too, so I’m looking forward to getting back with that group, too.”

Malzahn took over as head coach of the Auburn Tigers in 2013 and led the team to a 12-2 record in his first year. The Tigers won the SEC Championship and made an appearance in the National Championship game in 2013 as well.

As head coach, Malzahn has a 45-22 record, including a 10-4 outing last season. The Tigers picked up wins against No. 1 Alabama and No. 2 Georgia during the 2017 campaign.

Auburn will have their annual spring A-Day Game Saturday at 3 p.m. at Jordan-Hare Stadium, and the Tigers start their 2018 season on September 1 against Washington.

For more information on the GEICO 500 race, visit http://www.talladegasuperspeedway.com/. Listen to Sports Drive on WNSP weekdays from 3 p.m. to 6 p.m. and Inside Alabama Racing with Tommy Praytor Wednesdays at 6 p.m.