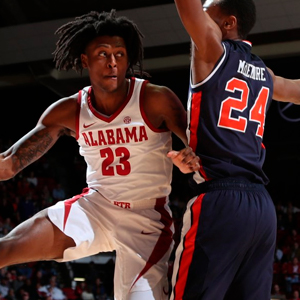 MOBILE, AL – Of the eight SEC teams that made to the NCAA Tournament, both Alabama and Auburn are dancing for the first time in 15 years.

Auburn earned the No. 4 seed in the Midwest region after winning the SEC regular season title. The Tigers will play No. 13 seed Charleston in the first round Friday at 6:27 p.m.

Auburn finished the season 25-7 overall, and in the SEC Tournament, the Tigers were upset by Alabama in the quarterfinals. Sophomore guard Mustapha Heron leads the team in scoring with 16.6 points per game, and junior guard Bryce Brown helps out with 16.2 points per game.

The Tigers are having their best season in nearly 20 years. Auburn hadn’t won the SEC regular season title since 1999, and they haven’t made the NCAA Tournament since 2003.

Auburn is 12-8 in NCAA Tournament games. Its best run came in 1986 when the Tigers lost a 76-84 contest against the eventual champion, Louisville, in the Elite Eight.

Alabama made a push in the SEC Tournament to make it in as the 9 seed of the NCAA Tournament’s East region. The Tide’s first round opponent in the NCAA bracket is No. 8 seed Virginia Tech, and the two teams face off Thursday at 8:20 p.m.

Freshman Collin Sexton averaged 26.3 points per game during the SEC Tournament and put in a game-winning buzzer beater against Texas A&M in the first round. The Crimson Tide fell to eventual SEC Tournament Champion Kentucky in the semifinals to close out their season.

Theodore native Dazon Ingram also put up 9.9 points per game and added 5.6 rebounds per contest for Alabama in his third year with the team. Alabama finished the regular season with five consecutive losses, but their push in the SEC Tournament propelled them to a 19-15 overall record.

Alabama has made 20 NCAA Tournament appearances in school history, and its furthest run came in 2004. The Tide made it to the Elite Eight and lost to the eventual champion Connecticut 71-87.

Alabama holds a 20-20 record in NCAA Tournament games and will have to win at least one game this year to maintain its .500 record. The last time the Crimson Tide made to the tournament was in 2012, when they lost to Creighton 57-58 in the first round.

The full NCAA bracket is available HERE and the action begins Tuesday at 5:40 p.m. with play-in games. Be sure to tune in to WNSP for more on the tournament.