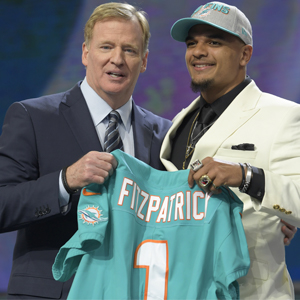 MOBILE, AL – The first round of the 2018 NFL Draft is in the books, and surprising picks were made across the board.
From the No. 1 overall pick in Baker Mayfield to the final pick of the first round, Lamar Jackson, the draft was not what experts projected just a week ago.

The second and third rounds of the 2018 NFL Draft continue Friday at 6 p.m. and rounds four through seven will take place Saturday at 11 a.m. Players like South Alabama safety Jeremy Reaves and Troy quarterback Brandon Silvers are still up for grabs.

Below is a full list of all the picks from Thursday night’s first round picks.