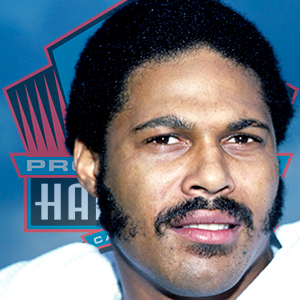 MOBILE, AL – Mobile native Robert Brazile was announced as an inductee into Pro Football Hall of Fame Class of 2018 on Saturday.

Brazile joined the Opening Kickoff on WNSP to talk about his recent induction and what it means to him.

“The feeling, there’s no words for it,” Brazile said. “It’s one of the greatest feelings I’ve ever had in my whole life, and I’m going to enjoy this experience. I know I’m going to make a lot of people happy with this.”

The standout NFL linebacker played his entire nine-year career with the Houston Oilers. He is credited with 1,281 tackles for his career, which ranks second all-time for the Houston Oilers/Tennessee Titans franchise history.

“Over 20,000 athletes have been out there playing football, and only the elite of them get the opportunity to play professional football,” said Brazile. “You’ve got to be patient in this thing. I don’t know about any other feelings, but I do know about the feeling I got this morning, that’s I’m a member of the NFL Hall of Fame, and that feeling is magnificent.”

Brazile is a five time first-team All-Pro selection, seven time Pro Bowl selection, and the 1975 Defensive Rookie of the Year. He was also the sixth overall pick of the 1975 NFL Draft.

“This morning, I’ve got my first orientation with the NFL Hall of Fame,” Brazile said. “I don’t know how I look in gold, but I know one thing: I’m going to get measured this morning for my gold jacket, my gold ring, and get all my instructions I’ve got to do for the next seven months.”

Brazile also spoke about the Super Bowl and his thoughts on the game.

“I watched the game really intensely for two quarters, and I was very pleased with what I saw with the Philadelphia Eagles,” said Brazile. “On both sides, they played some really good football, and I saw the coaches make some adjustments.

“You’ve got to be able to perfect your game as a team. You can shut one player down in the NFL, and that was proven last night when the Eagles shut Brady down. It took one sack and one fumble, and I’ve always said, the defense that makes people make mistakes will come out victorious.”

The 2018 Pro Football Hall of Fame Enshrinement week will be held from August 2-5 in Canton, Ohio.

Listen to the full interview below. For more, check out the Opening Kickoff with Mark and Lee weekdays from 6 to 9 a.m.