MOBILE, AL (WNSP) — Grant Enfinger is taking on “the Big One” this weekend.

“These truck races at Talledega are just so exciting,” he said. “You never know what’s going to happen next.”

The Fairhope native sat down with Mark and Lee from the Opening Kickoff to talk about the Fred’s 250 race this Saturday at Talladega Superspeedway.

“It’s ‘the Big One’ because, in 75 percent of these races… somebody’s gonna slip up, bounce off somebody, and they’re gonna wreck,” Enfinger said. “And when they wreck, it’s gonna take out anywhere from ten to twenty other cars or trucks when it happens.”

When asked if he likes the track, Enfinger replied “Oh, absolutely.”

“Obviously, Talladega is so big and wide and it provides for exciting racing the whole time,” Enfinger said. “The interesting part about this race for the Truck Series is this is a Chase Race for these guys here. It is gonna add even another level of excitement. I expect some crashes toward the end of the race on Saturday, but hopefully we can avoid them.

“Maybe we’ll wheel her into victory lane this Saturday. That’s the plan, anyway.”

The 2015 ARCA champion signed with a Camping World Truck Series team this past year with the intention of running every race with them. Enfinger said that not everything went according to plan.

“It just didn’t work out for us to run full-time this year at GMS Racing,” he said. “That was the intention of everyone going into the season and it just didn’t pan out. This is my seventh race of the year. I’m working on next year’s stuff, but nothing is solidified at this point.

“We’re continuing to work on it every day.”

Mark asked Enfinger what makes truck racing different from cars in driving, and why he liked driving them, as opposed to stock cars.

“Specifically at Talladega, what makes trucks so different, is that these trucks punch such a big hole in the air,” he said. “Everything that already happened with the draft as far as sucking up to somebody really hard, getting a really good draft,… everything in the truck is amplified. It’s extreme. So, when somebody pushes you, it makes it that much worse…

“It’s crazy how much the air pushes you around in these trucks.”

The Fred’s 250 sponsored by Coca-Cola begins at noon tomorrow, and will air on Fox. For more, listen to Opening Kickoff with Mark and Lee every weekday morning from 6 to 9 a.m. and Inside Alabama Racing every Wednesday at 6 p.m. 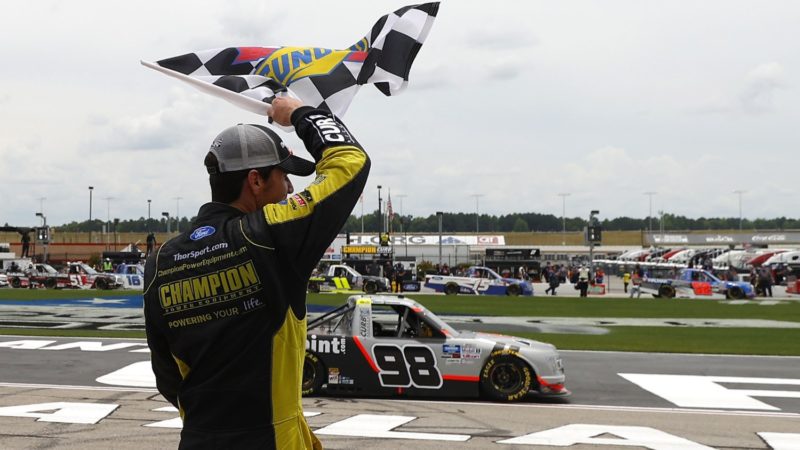