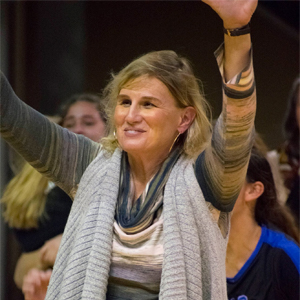 MOBILE, AL – Bayside Academy has won 23 state championships in volleyball over the last 31 years, and head coach Ann Schilling is responsible for most of that success.

“I count my blessing every day,” Schilling said. “We play a pretty tough schedule, but I think it helps prepare us for when that time comes that we play in the state championship. The kids are put into difficult situations, and they know how to respond.”

“I don’t talk about it much,” Schilling said. “They know, and we know what we have to do.

“The kids work hard, and they’re dedicated. They’ve got the commitment, and they persevere. There’s been really good groups of kids and parents who have really bought into the program.”

Because of her outstanding success in high school volleyball, Schilling was inducted into the AHSAA Sports Hall of Fame on March 19.

“I just wanted to win one state championship,” Schilling said. “When we did that, success just breeds success.”

For more, you can listen to the full interview below and tune in to Prep Spotlight Wednesdays at noon and Sports Drive on WNSP weekday afternoons from 3 p.m. to 6 p.m.