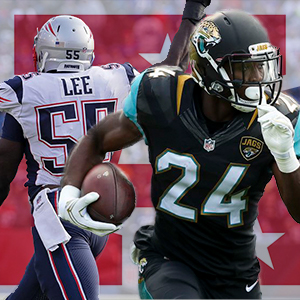 “They played their hearts out for the Daphne Trojans,” said former Daphne football coach Glenn Vickery. “It really makes us proud to see those guys exceed. Our whole community is really proud of what they have been able to achieve.”

After high school, Yeldon played three years at the University of Alabama. He was a part of the 2012 BCS national championship team and named First-Team All-SEC in 2013. The Jacksonville Jaguars selected Yeldon in the second round of the 2015 NFL Draft at 36th overall.

Yeldon is in his third season for the Jaguars where he is averaging 5.2 yards per carry. He ran for two touchdowns this season in 10 games. Yeldon highlighted his year with a 58-yard touchdown run against the Indianapolis Colts. In his post-season debut, Yeldon ran a four-yard touchdown against the Steelers on Sunday.

Lee played college football for the University of South Florida. As a senior, he earned a second-team All-ACC selection. Lee worked out with several NFL teams before signing with the Texans in 2016. However, his NFL debut came in 2017 with the Patriots.

Lee played six games for the Patriots in his first season. He picked up 19 total tackles and caught an interception to help New England’s defense.