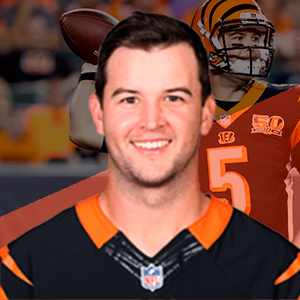 MOBILE, AL – After winning his grievance case, AJ McCarron is a free man.

The NFL quarterback and Mobile native is now an unrestricted free agent in the NFL, which means he can choose any team he wants this offseason.

After playing his first four years as a backup with the Cincinnati Bengals, McCarron will look for a starting role at a different team. In October, McCarron was part of a deal between the Bengals and the Cleveland Browns, but the paperwork was not sent in before the NFL trade deadline.

Throughout his career in the NFL, McCarron has completed 86 of 133 passes for 920 yards. He has also thrown six touchdown passes and two interceptions.

McCarron went to the Bengals in the 5th round of the 2014 NFL Draft.

What was it like to play baseball with Michael Jordan? Former Barons teammate Larry Thomas is here with the inside info!